Imaginative ornamentation, full of associative content. Oriental and playful freedom that can make one speechless. Sensitive and soft use of color, gives the 'figures' good interaction.

The drawing has a classic, centered structure. You may not notice it right away. The upper left and right corners flank the non figurative motif that spreads out in all directions from the center. This creates a movement in the drawing - a visual structure that is both concave and convex at the same time. The line, palette and contrast in the cold blue tones taste of Arne Ekeland's drawings, "The Last Shots" (1940) and "Sisters of Freedom" (1957-58), but the big story is missing. Maybe there are figures hiding in this landscape - actors in a story we do not know the content of?

The eye scoures the surface in an eternal movement of eight, and as soon as a figure is glimpsed in the corner of the eye, it is gone again. I imagine that they are there, that they are hiding in the mold. Like figures in the clouds, formations in the stars or the groke in the dark.

Oooo ..this was a great love story ... Song of Songs ... "I'm the pine, dark and heavy..you are birch, light and young" something like a Norwegian male poet once wrote ..I get very struck by these drawings .. .I look forward to seeing them ..also in "in the flesh" as Paul concludes his letters …

Overwhelming .... you are spot on ... the reindeer buck and the two at the mercy of the

This picture engages as soon as I see it. Words like diversity, mystery and meditation come to mind. The picture is reminiscent of petroglyphs at the same time as it has surrealistic elements that sets the imagination in motion. I first go in to the the picture by following the  beautiful blue line that I call the lasso, and then the journey of discovery and associations begins. It's amazing how many stories the picture makes room for! The more people who see the picture, the more experience and stories it gives. 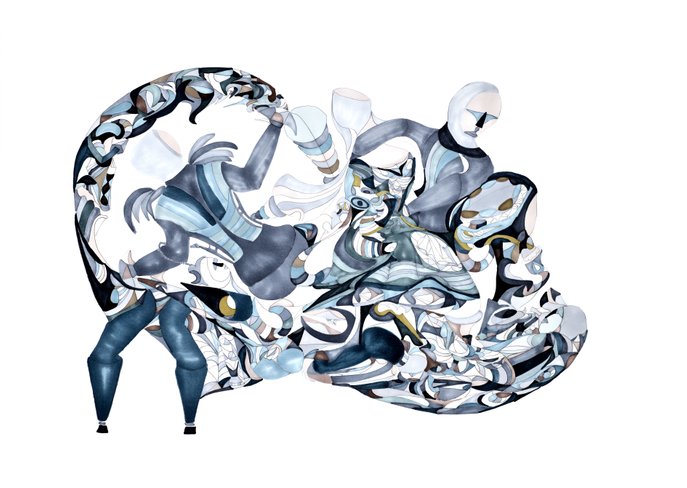 The image appears at first glance as an abstract play with shapes and colors, almost like a mosaic. Gradually, some figures and concrete forms appear. A face. An upper body that mixes with other forms in a kind of dance. Another figure is sitting with his back to the viewer. The shapes and colors flow into each other in an endless rhythm. Like waves. It's chaotic. Pulsating. The strokes of the image meander like a large worm, or many small worms, on the paper, and the gaze does not rest. At the same time, we sense a resistance in the figures, as a stagnation, a reservation. A reflection. 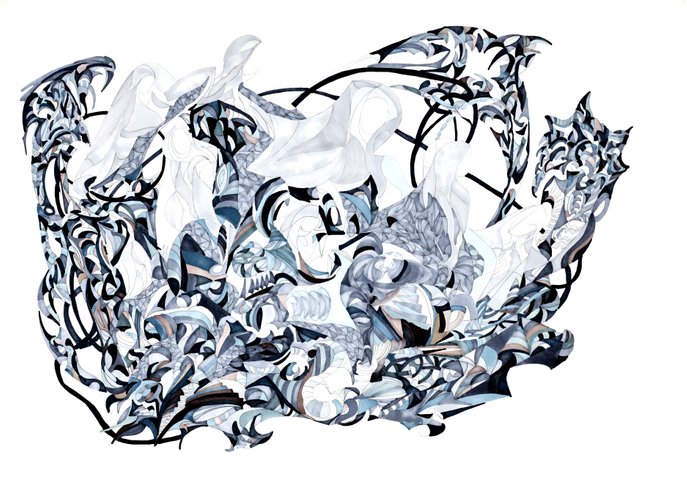 I like to rest my eyes on this picture. The contrasts make it dynamic: Beautiful lines and chaos, struggle and progress, loneliness and sisterhood. 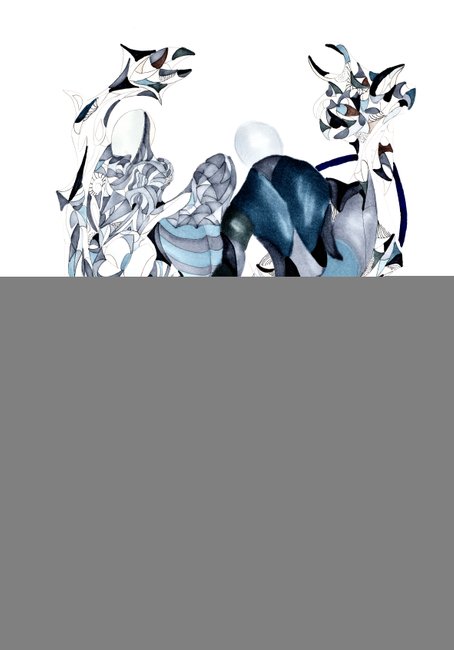 The motif is made up of shapes that are reminiscent of hair that curves down a back or spring leaves that embrace each other up a tree. The flat surface swarms with lines moving upwards, as if you are witnessing a flower opening towards the sky. At the top of the picture, we sense two heads, perhaps the head of the Virgin Mary and Jesus, which are surrounded by a shape that in this context may resemble a halo. Mother and son (if that is what we see) look into the picture and an empty white area, as if they are looking inwards into infinity. The work gets

a character of being a kind of battlefield between intense movements, rhythms and contemplation.

I think - that it must be thought of as a connection of energy, movement and rhythm in a form. It is something that, to a greater or lesser degree, is not in a state of stagnation. A standstill can also be a concentration - that something is collected in such a way that it is no longer possible to sense as movement. A concentration can be the opposite of equal forces, which means that something can be held, locked. Or there may be a minimum state of energy that has the same effect. Something about thinking about the landscape through acting in it, treating it. Something about concentration, movement, holding something and letting go of something. Such things .... Think specifically about what is actually happening. Look at a painting by Willem De Kooning (which is obviously a trace of

something performative) and a performance by Chris Burden.